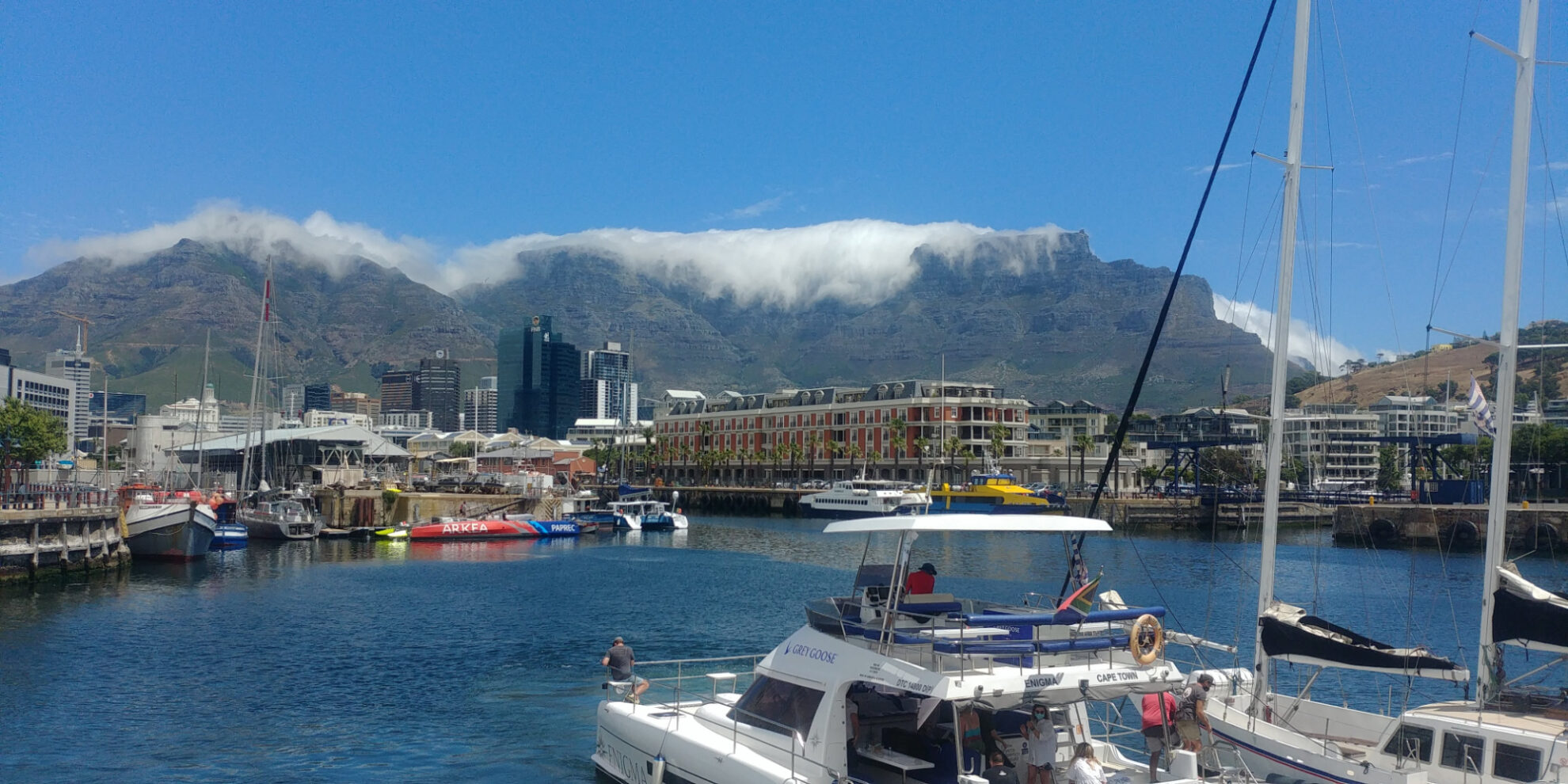 I live in Cape Town and we have lovely sandy beaches, many fringed with dark, rugged rocks and, to top it all, the dramatic backdrop of Table Mountain.

To give you an idea of Table Mountain’s beauty, here’s a photo I took of it from the Waterfront, a shopping area located in Cape Town’s harbour area. On most sunny days the mountaintop is clear, but occasionally the conditions are right to produce the striking tablecloth on the summit.

The photo below is of a bay close to where we live. You can see the beaches of Clifton at the top left, and you’re probably thinking it has a nice warm Mediterranean appearance.

I have to say, on a hot summer’s day the sea looks inviting with the Atlantic waves rolling in and crashing onto the beaches, whales breaching a few hundred yards off the coast, seals frolicking in the shallows, sun bathers plastering themselves with lotion and the more sensible beachgoers sitting under umbrellas.

Some people even swim.

Well, a cold current from the Antarctic flows past Cape Town’s west coast.
As lovely as the sea looks and as hot as it can be on the beach, it’s not enough to persuade me to immerse my body in the icy water.

I can’t remember where I saw it, probably Twitter, but a saying about swimming in Cape Town that made me chuckle is “Eleven degrees is a geometric angle, not a temperature.”

Side Note: A few miles away, on the other side of the peninsula, the sea is warmed by a current from the equator. While not as warm as I’d like, I’m prepared to bravely wade ankle-deep in it.

My aversion to cold water might have something to do with my schooldays.

I attended high school in Johannesburg during the 1970s and – if you’ve ever been there you’ll know this – the temperatures in winter can drop below freezing overnight.

One of the lessons we endured was called PT (which I believe stands for Physical Training, though we called it Physical Torture) and, to make matters worse, my PT teacher was a particularly sadistic ex-gymnast.

On the first day of September, the official start of spring, our school swimming season began. It didn’t matter if the lawns were brittle with frost; we had to put on our tiny Speedo bathing trunks (if you don’t know what they look like, click here for a pic) and jump into the swimming pool.

I know, I know. We’ve all seen pictures of Russians breaking the ice and jumping into rivers in January, but I’m talking Africa here, you know: the hot, dusty place with lions lounging under trees to escape the baking sun, their tongues hanging out, panting to cool themselves?

I guess what I’m getting at is that I have an aversion to cold water – perhaps more than most.

Phew! I’m glad to have got that off my chest! 😀

Work is progressing on The Hounds of Magic (the second book in the Daphne Mayne Chronicles of Wydoria series) and I’m still on track to publish it in June.

One of the many things I enjoy about writing is doing research. Sometimes when I’m writing a scene, I pop off to the internet to find out more about a topic to ensure it sounds authentic.

An example is archery. In A Taste of Steel, I mention the bow Neve uses to hunt for game. Although I’ve shot with a bow and arrow I didn’t know a great deal about archery and, to make sure the scene was authentic, I spent hours reading about the history of archery and the many types of bows available.

I found it fascinating and spent far too long learning about archery through the ages, the many types of bows available today and the right way to stand, the correct way to draw the bowstring and a load of other facts besides. Very little of all that found its way into the book, but at least readers will feel what has appeared sounds authentic.

That’s it for now.

Keep well and stay out of freezing water!